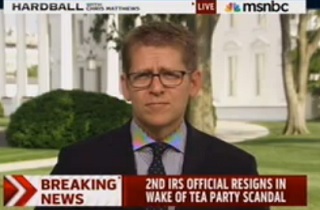 Recently, Daily Show host Jon Stewart has been going elbow-deep on the Obama administration over the current Scandalmania® that has gripped the political media. On Thursday night’s Hardball, White House Press Secretary Jay Carney responded to one of Stewart’s criticisms, that the President shouldn’t be finding out about the IRS and Associated Press investigations from news reports. Carney did his best to snuff out several of the flames on this Scandalabra™.

Carney responded by referring to President Obama’s comments on the matter, pointing out the firing of acting IRS Director Steven Miller, and the President’s instruction to gather all of the facts, adding that “he is outraged by this. You’ve heard him say that. And I can tell you, I know it’s true. His job as chief executive, as the President of the United States, is to take action when problems are discovered. To fix those problems. And that’s what he’s going to do.”

Matthews followed up on whether there would be more firings. “If the American people are filling out their taxes next year, know the IRS is still packed with the same people, it’s a problem. Isn’t it? Or is it?” Matthews asked.

“Well, Chris, I mean, if you’re suggesting that I should randomly fire people now,” Carney began.

“No, will he be happy if he doesn’t fire people?” Matthews interjected.

“We need to get all of the facts,” Carney answered, “and he has made clear that people who are responsible for failures will be held accountable. He will demand it. We need all the facts.”

Matthews then asked about the Associated Press leak investigation. “You weren’t informed at all what was happening at the Attorney General’s office with regard to his recusal of himself in this subpoenaing of all the records from the Associated Press,” Matthews said. “If this is the way the President operates, getting the news late, or getting it, as he says, in the newspapers, how can he be an aggressive chief executive?”

“Chris, I would turn this around,” Carney said. “Imagine what reporters would be saying, and people like you would be saying, if the President of the United States, and the folks in the White House, were being informed of, and engaged in, on a criminal investigation into a leak that presumably, because it’s a leak of classified information, has to do with a leak that emanated from somewhere within the federal government? That would be viewed as absolutely inappropriate, and in past histories of previous administrations beyond inappropriate. It is entirely appropriate that we are not informed of the progress or the methods used by federal prosecutors in criminal investigations.”

Carney also pointed out that, as part of the tension between protecting national security and protecting freedom of the press, the President “has long supported a media shield law.”

Pressed further, Carney told Matthews “I would ask you to consider the alternative to that and to, as you know, because you’ve covered this and have been, you know, around here for a long time, you know what past history here tells us about involvement of White Houses in criminal investigations led by the Justice Department.”

Matthews then got to Jon Stewart’s bit. “Jon Stewart, the other night, did a wonderful parody (it wasn’t actually a parody) of the President, time after time after time, saying, ‘I heard it in the papers, I read it in the news. Learning things other people are learning as they learned it. It seems like to run the United States government is to be ahead of the game.”

“Chris,” Jay responded, “can I please just urge you to realize, we’re talking about two issues that have to do with investigations or reviews by an independent inspector general or the criminal, a criminal investigation by the Department of Justice.”

Carney added, “What this President will do is, when he finds problems that need to be fixed in the federal government, he acts to fix them. And that’s what the American people expect him to do. But what he does not do is interfere in criminal investigations.”

“I didn’t ask him to,” Matthews said, although Carney’s point seems to be that just about any contact between the President and the DoJ over the leak investigation could easily be seen as interference, especially by administration critics.

Carney finished up by responding to criticism from RNC Chairman Reince Priebus, who shockingly thinks the IRS misconduct was inspired by the President who didn’t appoint the guy who oversaw it.

“We have seen, again and again this week, attempts that have largely failed to turn all of this into a partisan fight,” Carney said. “I think the Republicans have been chagrined by their failure to turn the Benghazi talking points, again, into some sort of political issue, because the facts just don’t support their accusations. When it comes to the IRS, nobody has been more forthright and clear about his outrage over the conduct that’s been reported than the President, and no one has taken action more than the President has taken action. He’ll continue to to so.”

While Carney could use a good comedy writer when responding to Jon Stewart, his point is spot-on. It is precisely because the White house has so little to do with the IRS that this “scandal” isn’t a much bigger deal, and since the leak investigation might involve the White House, especially if you listen to Republicans, the White House is right to steer well clear of it. It is telling, though, that Carney is confident enough in the failure of Benghazi, as a political issue, to bring it up himself.

Here’s the clip, from Hardball: