Leno Congratulates Fallon: We Fought Hard To Get NBC In Fifth Place, ‘Don’t Let It Slip Into Sixth!’
video

Leno Congratulates Fallon: We Fought Hard To Get NBC In Fifth Place, ‘Don’t Let It Slip Into Sixth!’ 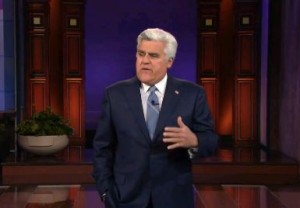 Jay Leno did not beat around the bush tonight, addressing the big news confirmed today that by this time next year, he will be out of the Tonight Show chair and Late Night‘s Jimmy Fallon will fill his seat. Leno opened his monologue by saying, “I had a really awkward day today. I had to call David Letterman and tell him he didn’t get the Tonight Show again.” He then went on to praise Fallon and told him that after NBC “fought, kicked, and scratched” to be the #5 network, the least he can do is make sure they don’t descend to #6.

Fallon also addressed the news on his show tonight, in remarks obtained by Deadline:

“Hello! Welcome! This is Late Night with Jimmy Fallon…For now.

You guys probably heard the news – I’m going to be taking over the Tonight Show next February! But don’t worry. Until February, our focus is right here on whatever this show is called…

I want to thank everyone here at Late Night, the staff, the crew, and of course The Roots. I have to say thanks to Jay Leno for being so gracious. It means so much to me to have his support. I just want to thank the fans for staying up to 12:35am and watching us.”

Watch the video of Leno’s remarks below, courtesy of NBC: