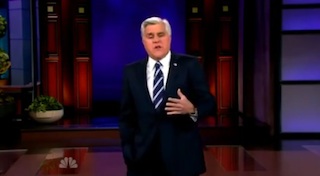 The Tonight Show with Jay Leno has never been known known for having particularly “edgy” humor. That’s probably why it’s the only comedy show on NBC that most of America will actually watch (You don’t listen to the mean regular people, Community. We still love you!). Take for example a recent barb thrown Mitt Romney’s way; a joke whose vicious premise seems to be that, hey, that Romney guy is kind of rich, huh? It wasn’t exactly the most biting of satire. However, something went wrong along the way and the joke has somehow created an international incident with India’s Sikh community.

In the joke, which aired on January 19th, Leno showed a news report on the various GOP candidates’ residences and, when it came to Romney, there was a spliced in image of a giant, golden palace. However, when the Tonight Show graphic department did their Google image search for “expensive looking castle” or whatever, they accidentally chose a picture of India’s Golden Temple, the holiest of Sikh shrines. And now, Indians are furious.

“The visiting Overseas Affairs Minister Vayalar Ravi yesterday ‘objected’ to the remark and said he has directed Indian Ambassador to the US Nirupama Rao to take up the matter with the State Department.

‘It is quite unfortunate and quite objectionable that such a comment has been made after showing the…Golden temple,’ Mr Ravi told a group of Indian reporters.

‘Golden temple is Sikh community’s most sacred place. Even our Prime Minister went there for praying in the New Year. I believe that the person who has shown is not that ignorant. The American Government should also look at this kind of thing,’ the NRI Affairs Minister said.”

Or, at least, some Indians are furious. Many think the whole thing is overblown and silly. The Huffington Post caught this great quote from Indian media commentator Suhel Seth told the AFP his theory of what was really going on:

“Jay Leno is a comedian, take him with a pinch of salt. But our politicians do not want to address real issues, like getting clean water to people. They would rather talk about silly issues.”

Whoa, whoa, whoa. Wait a second. India’s politicians sometimes feign outrage over a late night comedian’s jokes so as to avoid talking about issues? That sure sucks. Nothing like that ever happens here in America…

Watch the original Leno joke below: