Jay Leno Was Wrong: The Arsenio Hall Show Will Not Return for a Second Season 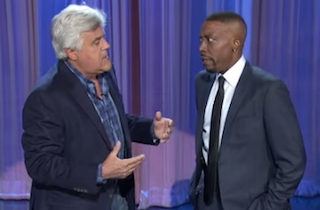 CBS unceremoniously canceled the rebooted Arsenio Hall Show after just one season on Friday. While the network had previously announced the syndicated show would return for a second season, it has apparently reversed that decision.

Back in February, Jay Leno surprised Hall, making his first post-Tonight Show appearance to tell the host his show had been picked up for a second season. Leno went so far as to hand Hall a letter that said his show had been “officially” renewed.

CBS released the following statement on the decision Friday:

“Unfortunately, ‘The Arsenio Hall Show’ will not return for a second season while there are many loyal fans of the show, the series did not grow its audience enough to continue. Arsenio is a tremendous talent and we’d like to thank him for all the hard work and energy he put into the show. We’d also like to thank Tribune and all our station group partners for their support of the show.”

While Hall’s show had a strong start in ratings, viewership quickly dropped off, with his numbers falling 60% within the first few months. Recently, he was averaging a 0.7 rating in total viewers and a 0.3 in the 18-49 demo, both far below his late night competition.

So far, Hall has been quiet about the news on Twitter though he did say this in a statement:

“When I started this adventure with CTD and Tribune, we all knew it would be a challenge — I’m gratified for the year we’ve had and proud of the show we created. I’d like to thank everyone on my staff for rallying around me and striving to make the best show possible every night.”

Like the rest of the late night slate, The Arsenio Hall Show was in reruns this week. It will not resume production, making last Wednesday’s show the final episode of the series.

Watch the clip of Leno on Arsenio below, via CBS:

Update — 10:30 p.m. ET: Hall sent out this tweet reacting to the news Friday evening, complete with a joke about the L.A. Clippers: