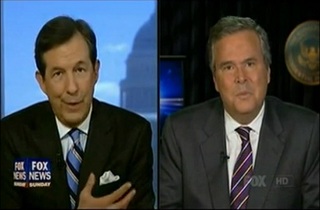 During his blitz of the Sunday shows former Florida Governor Jeb Bush was asked by Fox News Sunday‘s Chris Wallace about how his family name would impact any future political runs. Bush told Wallace that he “is proud to be a Bush.”

“Some people say that, obviously, you’re very proud of your family and their political accomplishments but the question is would it be a political burden. I think it’s fair to say that when your brother left the presidency he was somewhat unpopular. We looked around and the most recent poll shows that 46% view him favorably, 49% view him unfavorably. Do you think there is ‘Bush baggage’? Do you think it would be a problem?” asked Wallace, pointing to a negative approval rating for his brother, former President George W. Bush.

“No, I don’t think there is any ‘Bush baggage’ at all. I love my brother and I’m proud of his accomplishments and I love my dad and I’m proud to be a Bush and if I run for president it is not because of something in my DNA that compels me to do it,” Bush said.

“It would be the right thing to do for my family, that the conditions are right and I have something to offer and if I don’t run I have a blessed life. I can continue to do what I am doing now, work on education reform, and advocate the policies that I believe in and also, a little private life and that decision will happen, as I said, later on,” said Bush.