Jeb Bush Stands By ‘Act of Love’ Comments, Fires Back at Trump
VIDEO

Jeb Bush Stands By ‘Act of Love’ Comments, Fires Back at Trump 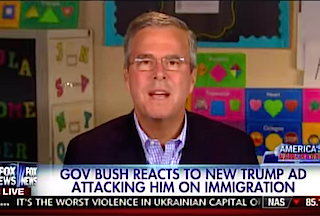 Jeb Bush’s assertion that immigrants entering the country illegally are committing an “act of love” came back to haunt him this week in the form of an attack ad from Donald Trump that has been drawing comparisons to the infamous Willie Horton ad from George H.W. Bush’s 1988 campaign. But Bush is not backing down from his original comments, as he told Fox News on Tuesday morning.

At first, when Fox’s Martha MacCallum asked Bush if he stands by his “act of love” statement, he shifted gears, saying, “What I stand by is the fact that we need to secure our border.” But once he was finished touting his own tough-on-immigration credentials, the anchor returned to her original question.

“But you stand by the fact that you believe that many immigrants come here out of an ‘act of love?'” MacCallum asked once more.

“Of course they do,” Bush replied, “but that doesn’t matter. What we need to do is secure the border.”

In response to Trump’s ad, the Bush campaign first fired back at Trump with a memo that accused the GOP frontrunner of supporting “soft-on-crime liberals.” Now, they have released an ad of their own titled “The Real Donald Trump,” which hammers home the point that Trump considered himself a Democrat for much of his career:

.@realDonaldTrump in his own words
https://t.co/FM0tF1mNTB

UPDATE — 12:40 p.m. ET: Trump reacted to Bush’s new ad with a series of tweets early Tuesday afternoon. He was not impressed:

Yet another weak hit by a candidate with a failing campaign. Will Jeb sink as low in the polls as the others who have gone after me?

While millions are being spent against me in attack ads, they are paid for by the “bosses” and “owners” of candidates. I am self funding.