Jeb Defends George W: As Kids, ‘We Were Spanked’ If We Pushed Others Down Like Obama Is
Video

Jeb Defends George W: As Kids, ‘We Were Spanked’ If We Pushed Others Down Like Obama Is 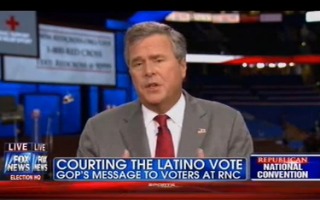 Former Florida governor Jeb Bush spoke with the hosts of Fox & Friends in Tampa Thursday, sharing his thoughts on his brother and father’s video for the RNC, and on whether he feels the need to come forward and defend his brother’s presidency when other Republicans seem to avoid doing so.

“I do that all the time,” said Bush. “That’s kind of my role in life now is to do that. I’ll mention that in my speech tonight. But look, we’ve got to look at going forward. The President’s been in office now for four years, this is the fourth year. He can’t keep always going back to the past and ‘saying, woe is me, I was dealt a bad hand.’ Yeah, the hand was tough, but he’s had four years and his policies haven’t worked. And I think the campaign ought to be about what we’re going to do now. People don’t want to go back to the past and relive, kind of relitigate why it was.”

Later, Bush opined that the GOP message isn’t one that is particularly welcoming where Latino voters are concerned, noting that Latino voters “share our values.” Looking further than this election, said Bush, the GOP has to recognize that the country’s demographics are changing and that “we need to change our tone, not necessarily our message.”

Going back to his brother, Bush admitted that — while he has a bias — he truly believes George W. is person of courage and integrity. He also shared that “every day I hear the current incumbent push down the past to make himself look better. When I was growing up, we were spanked when that happened.”