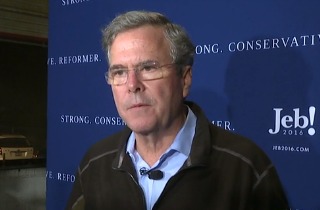 Jeb Bush held a town hall in South Carolina, where he was asked about how he would reassure those outraged that the police officers connected to Sandra Bland and Tamir Rice‘s deaths will not be indicted.

The first thing Bush did was slip up by saying that it was Chicago that had to rebuild trust over the violence in Rice’s case, when it happened in Cleveland. Bush may very well have been confusing that case with the unrest over police violence seen for the controversial deaths of Laquan McDonald and other African-Americans in the city.

After he apologized to ABC’s Candace Smith for the mix-up, Bush said that police officials and politicians have a responsibility to develop trust with their communities. Nonetheless, when it came to the cases at hand, Bush was of the opinion that “the process worked.”

“If there is a grand jury that looks at all the facts and doesn’t indict maybe there’s reasons for that,” Bush said. He went on to express doubts that all grand juries are racist, but also that even with these repeated tragic instances of violence, his view is that law enforcement must have support.

Rice’s case in particular has been the latest spark in social justice protests around the country, when a grand jury decided not to formally charge the officers who shot the 12-year-old while he held a toy gun.