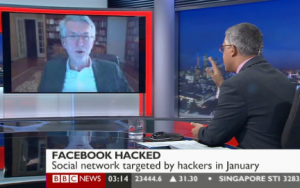 Facebook disclosed yesterday that the laptops of some of its employees were hacked last month, reassuring the public that no user information was compromised. BBC News covered the story last night, and brought on blogger and journalism professor Jeff Jarvis to weigh in. Jarvis spent the entirety of his appearance scolding the network for its “irresponsible” coverage of the hacking story, accusing the network of creating a “technopanic” and peddling “crap.”

The BBC anchor asked Jarvis, a CUNY professor and blogger for BuzzMachine, if the Facebook hacking was a big story because of how massive and widely-used the site is. Jarvis immediately dismissed the importance of the story and said the network was acting “irresponsible” and trying to create a “technopanic.” He said it shouldn’t be that big of a story because Facebook caught the hack and took care of the malware before it compromised any user information. Jarvis scolded the BBC for trying to make it into “a cause for panic around the world.”

The anchor pushed back, arguing that the story is significant because it is only the latest high-profile hacking, following hacks of Twitter, The New York Times, and The Wall Street Journal, among other sites. Jarvis dismissed it and continued going after the network for sensationalizing the story.

“This is irresponsible journalism. This is crap… There’s no story here. This interview shouldn’t exist. I said that to your pre-interviewer, I’ll say it to you, you’re just causing a panic and there’s no reason for it. Answer me that, please.”

The anchor insisted that it is a “point worth discussing,” to which Jarvis continued on his tirade, mocking the network for having a “technology is scary” attitude. He accused the media of highlighting the negative side of technology while underreporting the positives and benefits of such technology. He concluded, “This is crap and you know it.”

When the anchor tried to wrap up the interview, Jarvis accused him of not wanting to hear his views. The anchor said he was ending the interview due to “the nature of your language.” Jarvis incredulously told the anchor he could say “far worse” than crap.

Watch the video below, courtesy of BBC News: