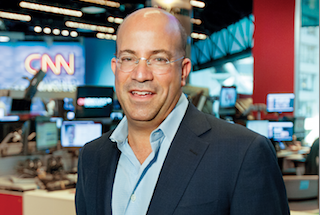 Jeff Zucker stayed relatively silent during his first year as president of CNN Worldwide, but over the last month he has started to open up about his tenure to date and his plans for the future. First, in an interview with Capital New York, Zucker said he aimed to put “more shows, less newscasts” on CNN’s air in 2014. Then, he told AdAge that he would soon be “shaking up” CNN’s prime time lineup.

Zucker continued his candor during a Q&A with the media at the Television Critics Association winter meeting Friday in Pasadena, California. According to reporters in attendance, below are the highlights of what Zucker had to say about the year to come:

On Fox News: “We happen to be in the news business as opposed to some other ‘fair and balanced’ news networks… “The Republican Party is being run out of News Corp. headquarters masquerading as a cable news channel.” [@Deggans, @TVGuide] [When asked about what Roger Ailes said about him in a mid-December interview with THR where Ailes said that MSNBC and CNN are “out of the news business.]

On MSNBC (and Fox): “When you watch those channels you only hear what you want to hear — and you miss the story.” [@PlanetEd]

On Roger Ailes claiming CNN is “out of the news business”: “CNN is not and never will abandon our first and fundamental brand equity which is news and breaking news.” That’s just “silly criticism that’s meant to deflect [attention] from the book.” (Gabriel Sherman’s forthcoming biography, The Loudest Voice in the Room

On the possibility of Jay Leno moving to CNN: “That’s not really a priority for us now. Obviously, I have a long relationship with Jay, I think he’s a terrific talent.” [@brianstelter]

On the potential for Ann Curry to leave NBC for CNN: “Ann is a terrific talent. I do have a long relationship with her. She is under contract at NBC and she is not available at this despite what I know has been postulated and out there. … If she were ever available that’s something I would certainly look at, but she’s not available.” [The Wrap]

UPDATE: When Mediaite asked for comment, Fox suggested that:

“Perhaps Zucker was attempting to deflect from his recent ratings woes”