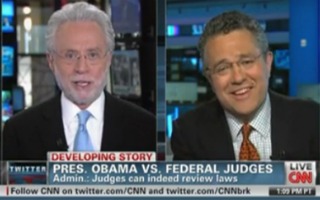 CNN Senior Legal Analyst Jeffrey Toobin doubled down on comments he made on Thursday, telling CNN host Wolf Blitzer that the 5th Circuit Court of Appeals was demanding the Obama administration respond to a “phony, made up controversy.” Toobin further called Harvard Constitutional Law professor Laurence Tribe “willfully obtuse” when he made the assertion that President Obama “didn’t say what he meant.”

RELATED: Jeffrey Toobin: Some Republican Judges ‘Deranged By Their Hatred For President Obama

On Wednesday, constitutional legal scholar Laurence Tribe, a former mentor to President Obama when he attended the prestigious Harvard Law School, told the Wall Street Journal’s Jared Favole that the president “obviously misspoke” when he made the controversial comments about the Supreme Court’s ability to make the “unprecedented” move of striking down all or parts of the Affordable Care Act.

“He didn’t say what he meant,” said Tribe. However, Tribe asserted that the 5th Circuit was within its rights to request a clarification from the administration as to the president’s meaning. “having said that, in order to avoid misleading anyone, he had to clarify it.”

Blitzer asked Toobin, a Harvard alum himself, to clarify if he disagreed with his former professor. “I revere Laurence Tribe and I think he’s completely wrong here,” said Toobin. “I don’t get what this controversy is about. It is a totally phony, made up controversy.”

Toobin went on to say that at no point did President Obama say he would not comply with a ruling by the Supreme Court or suggest that the Court lacked the authority to strike down portions of the health care reform law. “He simply said that the Court, in his opinion, should not do it,” said Toobin. “The idea that there is some challenge to the court seems to me to be completely absurd.”

“I don’t see how you could be so willfully – um, looking for a fight, to say that the president was somehow defying what the Supreme Court has historically done here,” Toobin said. “I don’t know how you could be so willfully obtuse, with all due respect to my beloved Professor Tribe, to think that the president is saying it is outside the power of the Supreme Court to overturn a law. That’s clearly not what he was saying there.”

On Thursday, Toobin said that the 5th Circuit justices were having a “judicial hissy fit” in requesting a clarification from the Obama Administration and that some Republican judges are “deranged by their hatred for President Obama.”