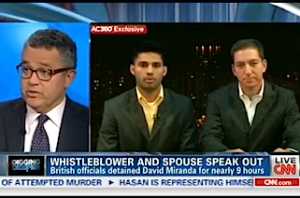 Immediately following Anderson Cooper’s highly-charged interview with The Guardian’s Glenn Greenwald and his partner David Miranda over Miranda’s recent 9 hour detention at London’s Heathrow Airport, CNN legal analyst Jeffrey Toobin came on to offer his own take on the matter. Toobin proceeded to describe Miranda as nothing more than a “mule” taking something unknown from one airport to another.

Saying he thought British authorities were completely “justified” in detaining Miranda, Toobin said, “I don’t want to be unkind, but he was a mule,” adding, “our prisons are full of drug mules.” Toobin added, “Glenn’s view is as long as one of the two people on either end of that transaction was a journalist, he can take anything he wants.”

Cooper pressed Toobin on his assertions, asking if it was really lawful for Miranda to be detained under the Terrorism Act. Toobin argued that if Miranda were carrying NSA secrets, then it could be considered legitimate under that law. “If terrorist know how we surveil their cell phone calls, how we surveil their texts,” he said, “that could be useful for terrorists.”

Jesselyn Radack from the Government Accountability Project backed up Greenwald and Miranda, calling Toobin’s theory “completely vacuous.” She said, “David was serving as an in-between, not as a drug mule. I have to wonder why the U.S. government and our allies are so desperate to keep our illegalities secret and our lawbreaking secret, that they are willing to use a terrorism law to stop a journalist.”

But Toobin remained resolute in his position. “Mr. Miranda was lucky they used the Terrorism Law,” he said. “I’m sure it was inconvenient to be stopped for nine hours at the airport, but, you know, when it happens to you on JetBlue they don’t even offer you a lawyer. I just don’t think he was sent to the gulag. He was delayed for a while and they took what appears to be stolen classified information. I think Mr. Miranda actually did pretty well, considering what he was carrying.”