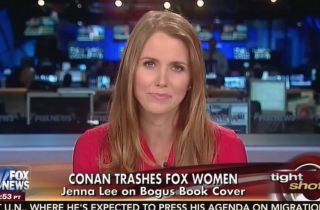 Lee responded to the controversy last week in a Facebook post, telling viewers that the picture was actually from a food interview she did in 2011 with GrubStreet.

Lee appeared on Media Buzz Sunday morning to further address the issue. Acknowledging that television journalists must not be thin-skinned when it comes to criticism and jokes, Lee said “at a certain point, silence makes you complicit.”

The Happening Now anchor added that part of the job as a television news anchor is “looking good,” in addition to ensuring that the content and demeanor of the broadcast are as professional as possible.

Asked whether O’Brien should apologize to her, Lee demurred: “He was trying to be funny. He failed, clearly. A lot of the viewers that weighed in also thought it wasn’t really that funny. But I think my point has been received very well.” She added that both men and women at Fox have expressed appreciation for her response to O’Brien.