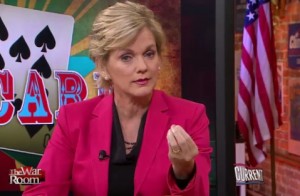 On Thursday night’s edition of Current TV’s The War Room, host and former Michigan Governor Jennifer Granholm slammed presumptive GOP nominee Mitt Romney for failing to stand up to anti-gay conservatives who she says “bullied” openly gay Richard Grenell into resigning as a Romney foreign policy advisor. Granholm cast Romney’s silence as the latest in a series of missed opportunities to show leadership, and to stand up for his principles in spite of the potential political cost.

While there is some argument over what really caused Grenell to resign, the fact is that Romney, while claiming to have done everything he could to retain Grenell, has not come out and denounced the anti-gay campaign against Grenell. Gov. Granholm refers to situations like this as “Wild Cards,” unexpected situations that arise (such as this, or Rush Limbaugh‘s attacks on Sandra Fluke, or the booing of a gay soldier) which offer candidates a chance to either show leadership, or capitulate to the loudest voices in their party. Granholm says Romney has failed these at every opportunity, because he is a “hollow man” with “no core.”

While I thought Hollow Man was an awesome movie, and would have been fine if they had never made The Core, I take her point. Mitt Romney has displayed rank cowardice in the face of mouth-foamers like the anti-gay right and Ted Nugent, but I disagree slightly on one point about Grenell. As a liberal, I am loathe to say this, but while Romney’s reflexive failure to stand up for Grenell was, indeed, a missed opportunity to show leadership and perhaps pick up some independents, there was absolutely no political upside for him.

As I’ve pointed out over and over again, Mitt Romney doesn’t have to do a thing to get the Republican base to turn out in droves. They hate Barack Obama so much, they would turn out for Keith Olbermann if you put an (R) next to his name. Romney doesn’t have to lift a finger to goose turnout, let alone jump through hoops. The only person these people hate more than Barack Obama is Michelle Obama, so as long as Romney doesn’t start wearing sleeveless dresses and telling people to do an occasional jumping jack, he’s golden.

Romney’s failures to do the right thing in situations like this, then, can no longer even be chalked up to craven political considerations. That’s giving him too much credit. It would have been a big win for Romney if he had denounced the hateful likes of the American Family Association’s Bryan Fischer, but his fear of his own base is so innate that it even overrode that selfish consideration. That should be a lesson to any independent voter who’s currently convinced that Romney will govern as a moderate.

Here’s the clip, from Current TV’s The War Room: