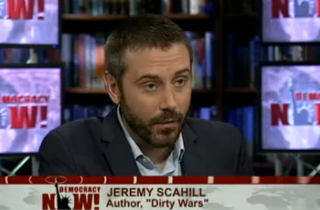 Scahill recalled how his jaw dropped at the portion of Obama’s speech in which he declared it America’s role to ensure the “free flow of energy” resources around the world. “[The president] basically came out and said the United States is an imperialist nation and we are going to do whatever we need to conquer areas to take resources from around the world,” he asserted. “It was a really naked sort of declaration of imperialism, and I don’t use that word lightly, but it really is.”

After bemoaning how the president has handled the NSA scandal and whistleblower-in-hiding Edward Snowden, Scahill offered up a harsh assessment of what this president’s legacy may ultimately look like:

At the end of the day you have this Democratic president who won the Nobel Peace Prize who then goes and stands in front of the United Nations and basically stakes out a neo-con vision of American foreign policy and owns it and kind of wraps it in this cloak of democratic legitimacy. I think when we look back at Obama’s legacy, this is going to have been a very significant period in U.S. history where the ideals of very sort of radical right-wing forces were solidified and continued under Mr. Constitutional Law Professor, Nobel Peace Prize Winner. It is really kind of devastating what is going on right now and I think if you take the long view of it or you step back and look at it and don’t just see the trees but look at the forest, President Obama has been a forceful, fierce defending of empire and I think that is going to be the enduring legacy of his presidency is that he was an empire president.

Watch the segment below, via Democracy Now: