Jerry Seinfeld Thinks a Seinfeld Reunion Would Be ‘Lame’
VIDEO

Jerry Seinfeld Thinks a Seinfeld Reunion Would Be ‘Lame’ 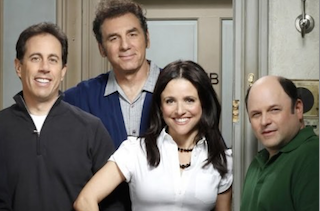 Jerry Seinfeld did his second Reddit AMA on Thursday and gave the world his definitive answer on the possibility of a true Seinfeld reunion.

“Do you ever think of doing more with Seinfeld?” one Reddit user asked. “I love the show and think a reunion episode or a sequel somehow would be amazing.”

I think you’re wrong. I think it would be lame, and I think it would be an embarrassment to the nice place that the show occupies. I’m absolutely happy keeping it the way it is. You can’t keep asking for more of certain things, you know? one of the keys to life is having a sense of proportion, knowing how long to sit at a restaurant after you’ve eaten, or how long you should go on vacation – if you go to Hawaii for a month on vacation, I guarantee you that by the end you’ll hate it. So it’s the same with a TV show, you want to do a certain amount of it, so that when people look back on it and they love it. I could have easily done the show for one or two or three more years, but it would have changed the way people look back at it. I think I made the right decision. Because people like the show now even more than they did in the 1990s, because it didn’t get worn out.

The closest Seinfeld ever came to have a real reunion was when the cast reunited for a mock reunion for the seventh season of Larry David’s Curb Your Enthusiasm. In some ways, it was Seinfeld and David’s way of satisfying the fan desire to see Jerry, George, Elaine and Kramer together again while at the same time showing them that it was probably a bad idea to revive the show.

Last year, Seinfeld and Jason Alexander teamed up and took on their old characters for an elaborate (and mysterious) Super Bowl promo that directed people to Seinfeld’s Comedians in Cars Getting Coffee project. While it was definitely fun to see the pair arguing over minutiae in that diner booth again, there was something slightly “embarrassing” about it.