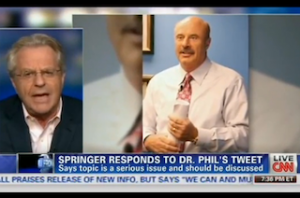 Dr. Phil McGraw declined to appear on CNN to address his quickly-deleted tweet posted last night that read, “If a girl is drunk, is it OK to have sex with her?” opting instead to release a statement. But fortunately another famous daytime talk show host, Jerry Springer, was on hand to defend the tweet to Erin Burnett, saying, “I don’t see what the problem is.”

McGraw’s statement read: “This tweet was intended to evoke discussion leading into a very serious show topic based on a recent news story, hence the hashtag #teensaccused. It was a poll question, not a statement or a joke.”

Explaining why he thinks McGraw’s tweet was “appropriate,” Springer said, “He does a serious talk show. I do a circus. It would be different on my show and maybe not appropriate. In his show, it is a serious issue.” He added, “for them to raise it as a subject on their show, I don’t see what the problem is. It should be discussed. I don’t know why they took it down.”

Burnett challenged the idea that McGraw could raise these issues on Twitter, saying to Springer, “It looked like he was taking a page from your playbook, maybe when you are talking about something serious the way you phrased and did that tweet was what was wrong.”

Springer insisted that he does not take this issue to be a joke and took McGraw’s tweet seriously when he saw it. He also unapologetically defended the often controversial content on his own show, saying, “we do a show about people that do things that are a little over the line… we are in the business to show inappropriate behavior. That is what we do.”