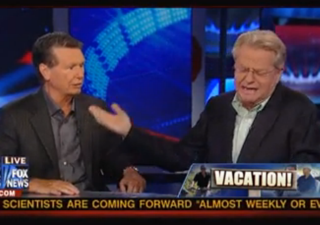 Who would’ve thought Jerry Springer would be the magic ingredient to make any tedious tax policy debate spectacular? Springer joined Sean Hannity and radio host Bill Cunningham for a spirited talk on President Obama’s tax policies and the extension of Bush tax cuts that, thanks to Cunningham, began on a high note: “Jerry, how could you even look yourself in the mirror after what you and your ilk have done to this city and this country?” It only gets better.

Springer responded jokingly to that question that he does, in fact, have trouble looking in the mirror, “but that’s just because of the way I look.” He then thanked Sean Hannity for “inviting me to the Republican Party Committee here,” and demanding that “people that are lucky enough to make an awful lot of money [should] pay a little bit more in taxes so that everyone in America could have health insurance, so that we have a stimulus program that works.” That kind of talk went exactly as you’d expect it to go on the set of Hannity.

“1660 Pennsylvania Avenue, you can donate all the money you want!” Hannity suggested, adding that he felt “overtaxed” and wasn’t about to jump to pay more money. Springer then tried to turn the Hannity crew against him, asking the host to “talk to the people running these cameras,” but Hannity quickly shot back “the people running these cameras love me!” Cunningham jumped in at that point, and took over for most of the segment while Hannity sat back and watched the show (and the program director brilliantly cut to the host occasionally as he surveyed the rhetorical landscape). The conversation then went everywhere– the war in Iraq, government workers, and “Jimmy Carter‘s third term.”