Jerry Springer: “The Liberals Have Won” And “We Are A Liberal Country” 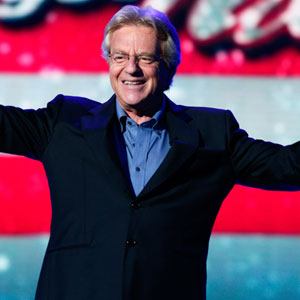 Jerry Springer appeared on Howard Stern’s radio show yesterday and the conversation got around to Air America. Stern then asked why liberal talk shows never do as well and Springer had an interesting answer: “Because the Liberals won.”

At first it seemed like Springer meant only in the very current spectrum which would make sense. Shows that adhere to one political ideology always seem to have better periods when the opposition is in power because, well, complaining makes for more compelling entertainment. While it obviously didn’t happened, there was definitely some concern that a show like The Daily Show, which does go after both sides but could never be mistaken for a “Conservative” show, would fail once George W. Bush was out of office.

However, it soon became clear that Springer was talking in much broader strokes:

“It doesn’t matter who’s president because the Liberals won. In the 1960s, all the protest was on the Left because America was conservative. We have conservative politicians, we give conservative speeches, but on every major issue the liberals have won. We are a liberal country. You can go into the most conservative neighborhood in America and, you go into their home, talk to their kids, and their kids listen to the same music, talk the same way, dress the same way. Culturally we’re liberal.”

Springer went on to point out how he did a show years ago about interracial marriage that was picketed and protested and that, now, we have an interracial president.

There are a couple of interesting points here. Obviously Stern’s original question always makes for good conversation but the idea that Liberals have “won” is an intriguing idea. However, I think Springer’s looking too broadly on this.

Liberals will always seem to come out on top on some issues because some change is simply inevitable. Just like the eventual acceptance of interracial marriage could have been predicted when Springer did that protested show, Liberals will also eventually be on the victorious side of the gay marriage issue (feel free to bet against it but you will lose your money). Change happens. It always will. The party that advocates progressive change will always win out some of the time so, if you cherry pick cultural things like that, then, yes, it will look like the Liberals have won.

However, if you were to travel back in time and talk to 60s progressives that Springer mentions, I’m sure they wouldn’t consider today’s society a 100% win. Obviously their minds would be blown when you mention a black president and female contenders, but how would they feel when you explained that they’d grow up and elect Ronald Reagan?

Still, an interesting idea from Springer who, of course, was a Democratic politician before he was the host of a show that proved that some people will never ceased to be amazed their spouse is cheating on them even after being invited on The Jerry Springer Show. While some progress is inevitable, some things never change.

Check out the audio from SiriusXM below:

(h/t Sharp Elbows via The Blaze)