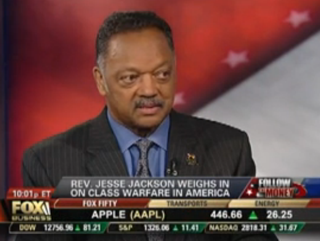 Rev. Jesse Jackson has been fairly mum lately in the public sphere, but he emerged today to talk race and politics with Eric Bolling— not exactly an ideological ally– and had an opinion or two on the effect the economy has affected Americans. Specifically, he noted that the housing crisis that began in 2008 with subprime mortgages was targeted at black Americans and “flat-out discrimination.”

RELATED: Fox’s Eric Bolling: Meghan McCain Might Be One Of The Dumbest People On MSNBC

The two discussed many topics, including President Obama and Newt Gingrich‘s potentially racial comments on food stamps. Jackson began his discussion of the economy noting that the banks came out pretty well from the housing crisis why many families were economically devastated. He went on not only to criticize the banks for the mortgages themselves, but their distribution, saying, “banks have to admit they steered and clustered blacks into subprime mortgages.” Bolling gave him a chance to clarify: “you said the banks had to steer the black community into buying homes?” He noted that the banks had actually lost a lawsuit where it was proven they were targeting black families, calling it “flat-out discrimination.”

They also went on to talk about Newt Gingrich‘s comments about food stamps, and Jackson argued that the food stamp program was not a black program, noting that 49% of people in the program were white. Bolling agreed, but noted that the problem he had with the attacks on Gingrich for calling President Obama the “food stamp president” was precisely that food stamps had no realistic ties to the black community.

Jackson also commented on President Obama, adding that he had a problem with Republicans who were “on the ship [but] willing to sink the ship just to get the captain.”