Jesse Ventura Likens US Gov. To Nazis, Says He’d Run For VP (But Only As An Independent) 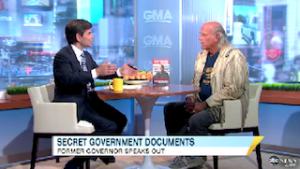 Jesse Ventura appeared on Good Morning America this morning for a typically loopy segment with George Stephanopoulos to promote his new book. They talked about how funny Chris Rock is, Michele Bachmann’s presidential prospects, and, of course, whether or not the US government orchestrated the deaths of thousands of Americans on 9/11. Stephanopoulos also asked Ventura if he had any White House aspirations. Ventura said he’d consider a Vice Presidential run but only as an Independent since everyone else is part of the problem.

The 9/11 talk was fun and included such notable quotes as the Nazi comparison from our headline. However, at this point, Jesse Ventura talking conspiracies is about as rare as Richard Simmons talking exercise, so lets focus on the Vice President stuff. Stephanopoulos brought up the question after airing an old clip of Ventura on The Young and the Restless (you laugh but can you honestly say it’s a less respected show than, say, Celebrity Apprentice?) in which Ventura’s character talks about running for president in 2004.

VENTURA: I will tell you this. If Ron Paul runs as an Independent, I would give great consideration to being his running mate. As you see, I’ve dedicated this book to Congressman Ron Paul.

STEPHANOPOULOS: Not if he runs as a Republican?

VENTURA: Never. I will not run as a Republican or a Democrat. They are the problem, not the solution. We need to abolish political parties in this country.”

When asked about Bachmann’s chances, Ventura (who lives in her district), said that if she won, it would be without his vote.