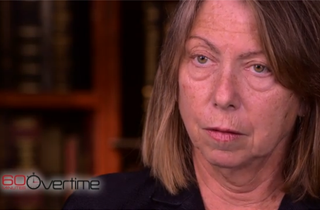 In an interview with 60 Minutes that ended up online, former New York Times executive editor Jill Abramson revealed that Condoleezza Rice had personally asked her to kill a story about the CIA from reporter James Risen.

As she recounted to Stahl, Rice, then National Security Advisor, was rather awkward about the entire thing, asking her to personally visit her in an undisclosed location.

“She had a legal yellow notebook on her lap with lots of notes on it, and once I had taken a seat across from her, she barely looked up,” Abramson recalled.” She basically read in a very stern manner from her notes on this legal pad, which were just point after point about why this story would be damaging to the national security. I don’t think I uttered much more than ‘hello,’ and ‘I will think of what you said.'”

Rice’s bottom line “was to make sure that Jim ceases all reporting on this story, which was really an extraordinary request.”

Abramson added that she regretted not publishing Risen’s story, which ended up revealing the CIA’s failed attempt to hinder Iran’s nuclear program, and which landed him in a massive legal battle against the Department of Justice for not revealing his source. “It seemed, in the calculus of all of the major stories we were dealing with at that point, not worth it to me and I regret that decision now,” she said.

Watch below via 60 Minutes: