Jim Bob, Michelle Duggar Open Up to Megyn Kelly About Their Son Josh Molesting His Sisters 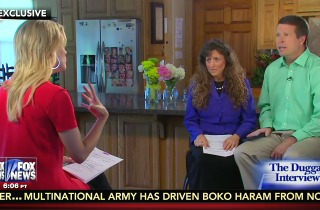 Fox News’ Megyn Kelly finally aired her big, much-anticipated interview with Jim Bob and Michelle Duggar, in which they opened up about their son Josh Duggar‘s public confession that he molested several young girls, including his own sisters, when he was a teenager.

The first time it happened, they explained, was when their son came to them, crying and saying he had touched his young sisters when they were asleep. Michelle Duggar said, “We had one ray of hope in that Josh had a tender conscience.”

There were more instances afterwards, Jim Bob Duggar said, in which their son had inappropriately touched his sisters over their clothes and “a couple of instances where he touched them under their clothes, but it was like a few seconds.” And, as he noted, his son’s victims didn’t seem to understand what had happened to them until it was subsequently explained to them.

They got very emotional as they spoke to Duggar about how they felt they failed as parents and how they came to the decision to send their son Josh to get therapy.

Later on, Kelly brought up 19 Kids and Counting––which has been pulled but not cancelled by TLC––and asked, “What would make you launch a reality TV show about your family, given this past?” Jim Bob Duggar said they weren’t worried because the records were sealed and they had dealt with all this years ago.

Kelly also brought up the charges of hypocrisy, given how strongly the Duggars had been preaching conservative family values. Jim Bob Duggar said that what his son did was “inexcusable but it was not unforgivable,” while Michelle Duggar said, “There’s an agenda and there’s people that are purposing to try to bring things out and twisting them to hurt and slander.”

Watch a portions of the interview below, via Fox News: