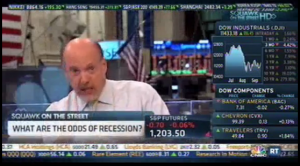 CNBC’s Jim Cramer reported Friday morning on Squawk on the Street that he’s hearing from business leaders off-camera that Obama is hated by business leaders. “The disdain is off the charts! This guy, he is hated like Jimmy Carter!”

Cramer’s candid insight came after news from anchor Melissa Lee that there was a sadness about the economy from many traders and about how The Conference Board said there was a 45% chance of the US going into recession. “They say that since 1988, every time that The Conference Board predicted the chances were higher than 40%, we soon went into a downturn. I just throw that out there in the context of it looks like the support for the American Jobs Act is unraveling a bit from both sides of the aisle for that matter. Could the writing be on the wall for President Obama’s presidency?”

“Let’s take The Conference Board at face value. Let’s say that’s right,” Cramer responded, “I mean, look, you don’t understand, when you are off-camera, I mean — the disdain for this guy! I often find myself saying like Trump did: ‘Come on, it is America. He’s our President. Support him.’ The disdain is off the charts! This guy is just hated. Okay. He is hated like Jimmy Carter!”

With the President’s polling numbers at record lows, Cramer’s bleak assessment will most definitely encourage conservatives that Obama is vulnerable for reelection in 2012. However, with Intrade astonishingly predicting Obama’s reelection chances at higher than 51%, if this is rock bottom, things can only get better for him.

Watch the segment below, courtesy of CNBC: