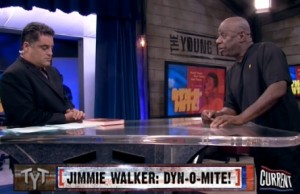 A few weeks ago, television icon Jimmie Walker, famous for his portrayal of J.J. Evans on the 70s sitcom Good Times, emerged as a critic of President Obama while promoting his book, Dynomite!: Good Times, Bad Times, Our Times–A Memoir. On Wednesday night’s edition of The Young Turks, Walker continued his political haymaking, telling host Cenk Uygur that, when people look back 100 years from now and ask what idiot was against gay marriage, his answer is “I’m that idiot!”

As marriage equality debates go, the segment was somewhat predictable, with Walker (who does support civil unions) citing tradition and the ability to bear children, and Cenk Uygur countering with the Loving v. Virginia Supreme Court case (perhaps the best-named Supreme Court case ever), but with the added twist of a quote from a lower-court judge in the case that I hadn’t heard before.

“Almighty God created the races white, black, yellow, malay and red,” said Judge Leon M. Bazile as he handed down the sentence for violating Virginia’s law against interracial marriage, “and he placed them on separate continents. And but for the interference with his arrangement there would be no cause for such marriages. The fact that he separated the races shows that he did not intend for the races to mix.”

Walker told Uygur “I also believe that in a hundred years from now, because they are the squeaky wheel, gay marriage will be legal,” and that people will ask “‘Who was against gay marriage? What idiot was that?’ I’m that idiot!”

He went on to tell Uygur he’s against gay marriage “on moral grounds, on the grounds that certain values, you’re brought up with,” and was unpersuaded by the Loving v. Virginia comparison.

The value of Jimmie Walker as a political commentator is obviously limited. He told Bill O’Reilly and Cenk that his criticisms of President Obama were based on “his policies,” but the only policy he criticized was Don’t Ask, Don’t Tell, the repeal of which Walker opposed, yet he criticized Obama for not repealing it fast enough. He’s also a lot older than you might think. When he was playing teenager JJ Evans in the 70s, Walker was 26, and he’s 65 years old now.

However, Walker is something of a bellwether for the kind of lightly-engaged voters who could decide this election. He told Bill O’Reilly that his yardstick for the Obama presidency is the old “Are you better off than you were four years ago?” standard, rather than “Will you be better off with the guy who wants to bring you back to four years ago?”