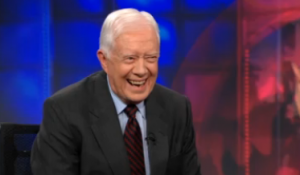 When Bill Clinton appeared on the Daily Show last week, he kept things all business, giving an intricate discussion of the ways America can fix its economy. His Democratic presidential predecessor however, was there to have fun. Jimmy Carter, promoting his new book White House Diary, was jovial from the beginning, telling Jon Stewart that he was looking forward to the Rally to Restore Sanity. He even joined in on the media’s favorite pastime of the moment; making fun of Christine O’Donnell.

Stewart asked Carter if, looking over his old diary entries, he felt hope in the direction the country was going. Carter responded with a quick “no,” citing the polarization of the nation which he partly blamed on Fox News. However, he then made a point of comparing himself as a candidate to the Tea Party of today, saying he “occupied the same position,” that of being a “fresh face” going up against the establishment. Still, though, he made an important differentiation between himself and the movement; he’s never dabbled in witchcraft.

If that wasn’t enough, Carter then told Stewart he had “one more confession to make.” Looking the host in the eye, Carter told him that, as a young man, he was not “100% against…” Stewart silenced him before he could finish the sentence.

No matter what you feel about Jimmy Carter, how many other 85 year old former presidents are going to go on comedy shows and discuss their personal histories with…being personal? I mean, sure, Rutherford B. Hayes would have if television had been invented (legend has it that the hair on his palms were as bushy as his beard), but that’s about it. So kudos to you, Jimmy Carter!

Check out the pretty darn hilarious interview below: