Jimmy Kimmel, Chris Cillizza Agree: Obama Has A Monopoly On Being ‘Cool’ 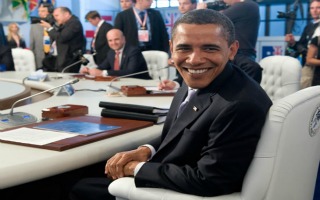 Recall how early in Barack Obama’s presidency, it was anathema to hear a joke at the president’s expense? For most, those days are long past – time and events have a way of diluting any president’s stature and opening them up for ridicule. This trend has not yet reached opinion leaders like ABC’s Jimmy Kimmel or the Washington Post’s Chris Cillizza who, within 24-hours of one another, observed that Obama maintains a monopoly on cool.

ABC’s late night host Jimmy Kimmel, who will headline this Saturday’s White House Correspondents’ Association Dinner, recently told Reuters in an interview that he has his work cut out for him because President Barack Obama is “hard to make fun of because he’s a cool character.”

“Outside of his ears, there’s not a whole lot to talk about,” Kimmel told Reuters.

Kimmel is joined by Washington Post political reporter Chris Cillizza who told MSNBC host Chris Matthews on Tuesday that Barack Obama was “cool.” Although, Cillizza expended the energy necessary to draw out the vowel sound in the word, emphasizing just how “cool” the President is.

“This is important, he is cool. Mitt Romney is not cool,” said Cillizza.

Matthews sought to interject some objectivity into the discussion and contradict Cillizza’s statement by playing a clip of Romney echoing President Obama in saying that he supports the extension of low interest rates for student loans. Now that’s cool.

“Can you dig it? I knew that you could,” said Matthews, showing off his coolness factor by parroting a catch phrase pioneered by comedian Billy Crystal on Saturday Night Live’s first season which originally aired in 1976. Now that’s cool.

Obama’s prohibitive coolness has been a common problem for liberal humorists since before his election. Cartoonists have routinely wrestled with how to satirize this President. In 2008, Saturday Night Live famously concocted a skit wherein the only criticism of the president that they could muster was that he was “just too awesome.” The sketch’s true targets were Obama’s fawning fans in the media, but the impetus for the sketch was the same – Obama himself is too cool for ridicule.

Fortunately, that meme has long died away for most. Obama is regularly the subject of mockery on late night television, on stand-up comedy stages, among political cartoonists and satirists. The “cool” that Obama exuded in 2008 has been replaced with a “coolness” more akin to aloofness and detachment. That’s why statements by Kimmel and Cillizza seem so out of step with the general perception held by many. For most with a broad and diverse social circle, it became acceptable to make fun of the president long ago – liberals and conservatives alike. In fact, it has even become “cool.”

Perhaps the trend setters in the media should try to keep pace with the sensibilities of their audience. No one has told them yet, so allow me: Iconoclastic mockery is back in fashion. What Kimmel’s suggestion reveals is that this Saturday stands to be a particularly boring WHCA dinner, especially if he cannot find one issue beyond his physical traits worthy of taking a jab at the President over.

Imagine if we had a president that could laugh at himself, who maybe didn’t take himself so seriously that he projected an air in which his supporters felt they were breaking some unwritten rule by making fun of him. Now that would be cool.