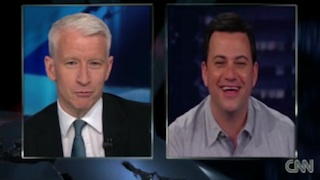 As with every year, the host monologue at the White House Correspondents Dinner has elicited days of analysis. Last night, said host Jimmy Kimmel appeared on CNN to discuss the event with Anderson Cooper. Like in the Entertainment Weekly interview released yesterday, Kimmel discussed how difficult the room is, pointing out that the audience is made up of politicians who refuse to laugh at half the jokes and journalists too afraid to laugh at any jokes. However, while the response might always be fairly uncomfortable, Kimmel shared with Cooper some of the jokes he cut for fear that things could have been worse.

The “offensive” jokes took on topics that weren’t exactly brand new (President Obama’s lack of listening to the public’s desire, Chris Christie’s weight, and Rick Santorum’s unsettling sexual hang ups) but did come with a bit more edge. However, Cooper proved Kimmel’s point about journalists, refusing to laugh at any of them. He did, though, make it clear that that might be for the best, considering the reputation his infamous giggling fits have gathered.

But Cooper wasn’t completely humorless. He gamely played the clips of Kimmel’s jokes about CNN. And, when discussing the angry response Keith Olbermann had to Kimmel’s set, he dryly dropped the qualifier that Twitter was “the only media form [Olbermann] still has access to.” Kimmel got in a shot of his own, sarcastically pointing out that Olbermann was successfully proving just how “likable” he is.