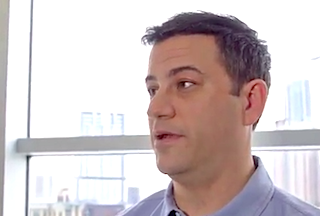 As fewer and fewer people watch late night television when it’s actually on television, the importance of creating segments that blow up the next morning becomes more and more important. This is a trend of which Jimmy Kimmel is well aware, as he told CNN during an interview filmed in Austin, where the host is currently taping a week of shows for the SXSW festival.

Dating back to Sarah Silverman’s “I’m Fucking Matt Damon” music video from 2009, Kimmel said that fans look to him for so-called “viral” hits, but he insisted that his staff is not constantly thinking about how something will play on the internet when they put it on TV.

On the question of Nielsen TV ratings versus social reach, Kimmel acknowledged that his YouTube audience dwarfs the number of people who watch the show at 11:35 p.m. every night on ABC, but said financially his job is still to sell commercials on television.

Typically, Kimmel’s TV ratings hover around the 2-3 million mark (though he had his fourth-largest audience ever with 3.914 million viewers when President Barack Obama was on last week). His YouTube channel, on the other hand, has more than 5.5 million subscribers and single videos routinely reach 10 million views. Obama reading mean tweets, for example, has already been seen more than 17 million times on YouTube.

Kimmel predicted that in the not too distant future the term late night “won’t mean anything, because now you can watch anything at any time.”