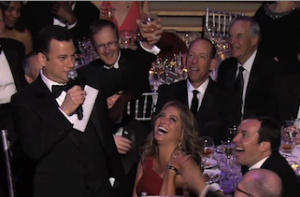 Many of the world’s most “influential” people gathered together this week in New York City for the annual TIME 100 gala. This year’s list is made up of a lot of serious, important people, but fortunately Jimmy Kimmel was in attendance to take the proceedings down a notch and deliver a hilarious, increasingly tipsy toast to his fellow comedians on the list.

“I wasn’t planning to be here tonight, but Marissa Mayer said I had to come in,” ” Kimmel began, poking fun at the Yahoo CEO’s ban on working from home. He quickly moved on to pay tribute to the other comedians on TIME’s list, beginning with “kid genius” Lena Dunham, “who taught me not to be ashamed of my own breasts.”

Next, Kimmel moved on to “Egypt’s Jon Stewart” Bassem Youssef, who mentioned the toast on The Daily Show last night. “This is a man who risks his life to bring laughter to his country,” Kimmel said. “I would just move.”

Kimmel saved some very kind words for Jimmy Fallon, who was feeding him a variety of alcoholic beverages throughout the toast. “Jimmy’s probably a bigger influence on me than anyone in this room, because he’s so talented and energetic that he forces me to be the best that I can be.” Teasing the new dynamic the will begin when Fallon takes over the Tonight Show and goes head-to-head with Kimmel at 11:35pm, he said, “Quite frankly, it’s a pain in the ass. I’d appreciate it if you’d slow down a little. But I love him, and I want to toast my future rival, Jimmy Fallon, who’s getting me very, very drunk.”

Watch video below, via TIME: