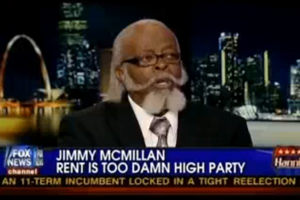 Have you been yearning to watch New York gubernatorial candidate/rap sensation/karate expert Jimmy McMillan sit down for a substantive political debate on the rent and whether or not it is “too damn high”? The wait is over. McMillian was the headlining guest on tonight’s Hannity, where he fared quite well fielding Sean Hannity‘s fiscally conservative questions and even admitted– much to Hannity’s amusement– that taxes were also “too damn high.”

“As long as I can help someone get a plate of food on their table, roof over their head, and money in their pocket– let it roll,” McMillan told Hannity by way of introduction into the segment, to which Hannity replied, “who’s going to pay for it?” McMillan outlined his policy– which includes New York declaring an economic state of emergency– and, yes, helping lower taxes. Hannity seemed pleased with his responses, until he came to the issue of the actual rent.

Hannity asked McMillan how he knew the rent is “too damn high” if he didn’t pay it. McMillan responded that he did pay rent, though he was in a special subset of citizens that paid less, but refused to give a number. “See, a lot of people think that you don’t pay rent,” Hannity insisted. McMillan had a easy explanation for why people would think that: “because people can’t buy food, they work 8 hours a day, 40 hours a week.”

The discussion from tonight’s Hannity via Fox News below: