Jindal: We Shouldn’t Admit Immigrants Who Want to ‘Undermine Our Freedoms’ 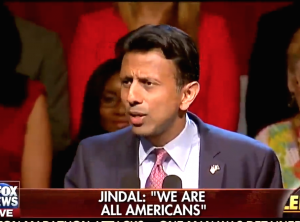 During his campaign kickoff today, Louisiana Governor Bobby Jindal reaffirmed his belief that the U.S. shouldn’t permit immigrants who come here to “undermine our freedoms.”

“We cannot allow people to immigrate to this country so that they can use our freedoms to undermine our freedoms,” Jindal said. “That’s exactly what has happened in Europe, where they have second and third generations of immigrants who refuse to embrace the values and culture of the countries they have moved into.”

And any people who come to the U.S., he added, should be “willing to embrace our values, learn English, and roll up your sleeves and get to work.”

Jindal was speaking along the same line he did months ago, when he said of Muslim immigrants that “they want to use our freedoms to undermine that freedom in the first place” and “if they want to come here and they want to set up their own culture and values that’s not immigration, that’s really invasion if you’re honest about it.”

Jindal had even suggested that immigration law should be fixed to keep out Muslims who want to impose Sharia law on the United States. Megyn Kelly challenged Jindal on that proposal and asked, “To say that if you are a radical Islamist or, more specifically, if you believe in Sharia law, then you won’t be allowed into the United States is controversial. Who decides how far into Sharia law you have to be? Who decides who’s a radical Islamist and who’s just an Islamist?”

Watch the clip from Jindal’s announcement today below, via Fox News: