JK LOL: Herman Cain Was Joking About An Electric Border Fence, Unless He Wasn’t 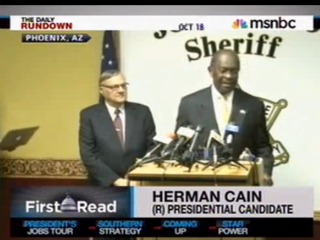 Herman Cain had an eventful Monday. Not only did he manage to kick off a pizza-related Twitter trend that successfully separated the fun-lovers from the fun-haters, he also had to deal with an unspecified security threat that made him late to a meeting with sheriff Joe Arpaio (“When you become a top-tier candidate,” he explained to reporters, “a lot of nuts come out of the closet.”) And yet he still found the time to make a great joke and/or a serious statement about an electric border fence.

You may recall that, yesterday, Sheriff Arpaio told CNN that Cain’s comment about installing an electrified fence along the U.S. border was surely a joke: “Oh, I’m sure he was joking. But it probably means that he’s taking it serious to do something at the border and stop the illegal immigrations.”

Cain confirmed that his comments were indeed made in jest:

Let me first say, it was a joke and some people don’t think that it was a good joke. And it’s probably not a joke that you’re supposed to make if you’re a presidential candidate. I apologize if it offended anyone. Mea culpa, mea culpa, mea culpa.

Almost immediately following that clarification and apology, however, and after a reporter said that his statements “didn’t sound like a joke on video,” Cain added that “we’re splitting hairs here” and that he will “not apologize” for “using a combination of a fence and it might be electrified.”

So: Herman Cain is apologizing for a joke that he made about an electric border fence, but he will not apologize for what may not be a joke at all.

Later on, Arpaio met with protesters and shared his own thoughts regarding all things fenced and electric:

I have an electric fence around the jail; I have illegal immigrants there. I have illegals on the chain gang. Nobody goes after me. He told a joke!

This conversation is all like so much Hawaiian pizza: Unpleasant, confusing, and instantly regrettable.

Have a look at how it all played out, via MSNBC: