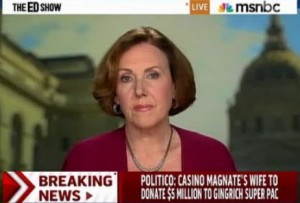 During Monday night’s The Ed Show, host Ed Schultz took on former House Speaker Newt Gingrich‘s penchant for “vilifying President Obama” with the “coded language” of racism. During the panel segment, Salon’s Joan Walsh summed Gingrich up in easily-deciphered fashion, telling Schultz that “Newt is the face of the politics of resentment and racism and angry white male rage” that led voters to vote against their own economic interests.

Schultz began the segment with a clip of Rep. James Clyburn (D-SC) telling CNN, “Newt Gingrich is throwing red meat to the base, saying little words and phrases that we are very familiar here in the South. I’m saying he’s appealing to an element in this party that will see President Obama as different from all other presidents that we have had.”

Gingrich responded to that generous critique (it’s really not coded at all) by saying “It’s unfornate that liberal leaders, whatever their ethnic background, can’t have an honest open debate about policies that fail. The fact is far more whites than blacks are on food stamps, and liberals shouldn’t get away with hiding the consequence of their bad policies by yelling racism.”

This is a strange statement by Gingrich, because he appears to be correcting himself. It wasn’t “liberal leaders” who singled out black people as being “satisfied with food stamps,” it was Newton Leroy Gingrich. It wasn’t “liberal leaders” who singled out urban poor kids to become 9 year-old janitors, it was Gingrich. He appears to want it both ways, to be a “teller of uncomfortable truths” about race to his base, while whitewashing his rhetoric for the CNNs of the world.

Panelist Martin Bashir tried to correct Gingrich, telling Schultz “We know today that more people were collecting food stamps under George W. Bush than are under President Obama. Something like a difference of half a million people.”

Bashir misstates the case somewhat, but he’s referring to the fact that Gingrich’s assertion that more people have been added to the food stamp rolls under President Obama than any other president is false. Under Bush, the number of food stamp recipients rose by 14.7. Under President Obama, 14.2 million have been added, but the number actually declined in the most recent month available.

Walsh then tied Gingrich’s race-baiting to Mitt Romney‘s economic opportunism, telling Ed “We have a really interesting case study in the Republican party in these two candidates because Mitt is the candidate, a vulture capitalist that hollowed out the middle class and represented and enriched the top 1%. Newt is the face of the politics of resentment and racism and angry white male rage that let guys like Mitt do that to the economy. They work hand-in-hand.”

Unfortunately, they will continue to work hand-in-hand as long as the mainstream media continues to let Gingrich skate on his explicit uses of race to stir up the base. When he gets in the polite company of mainstream journalists, he claims he was talking about all people, and far too few of those mainstreamers have the stomach for this fight, for simply saying, “No, that’s not what you said.”