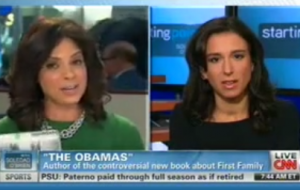 Soledad O’Brien welcomed The Obamas author Jodi Kantor on Starting Point Friday morning, and things got a little heated as O’Brien continuously tried to ask Kantor to defend her methodology in reporting the book.

O’Brien’s main point against Kantor was that she hasn’t interviewed the Obamas since 2009, but still wrote a book about details of their marriage (culled mostly from aides to the First Lady). Kantor defended her research by saying she had credible sources, sharing anecdotes that only these cooperative aides would have known.

“First Lady-hood is a really hard job,” Kantor told O’Brien, in the statement that set off the argument. “If you read the Laura Bush memoir, for example, she talks about feeling very misunderstood as First Lady, she talks about the isolation of living in the residence. You know, the house is practically–”

“But in a way, isn’t that the point?” O’Brien interrupted. “That’s her memoir. So after she leaves the White House as the First Lady — who often people leave their hands off the woman who isn’t elected to the office but is in the White House job to watch the kids… they write a memoir. And it’s her take on her experience in the White House.”

“But Soledad, your argument is that the First Lady shouldn’t be covered in a serious way by journalists? I look forward to reading her memoirs. But a reported book by an outside fair observer is a totally different project.”

Watch a clip of the heated interview below, courtesy of CNN: