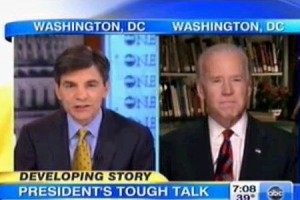 In an interview with Good Morning America host George Stephanopoulos Wednesday morning, Vice President Joe Biden passed on an opportunity to call former House Speaker Newt Gingrich out over his overtly racial politicking. Asked if Gingrich is playing racial politics with references to President Obama as the “Food Stamp President,” Biden responded, “It’s hard to tell. I’m not being facetious. It’s hard to tell what Newt means. He says a lot.”

Stephanopoulos first asked Biden to respond to Gingrich’s summation of the President’s State of the Union address. “The President gave a forceful defense of his record and agenda,” Stephanopoulos said. “His challengers were out with their response right away. Newt Gingrich said it’s time to confront the truth about the President. He said he’ll always prefer a Food Stamp economy to a paycheck economy, and call it fair. Your response?”

“It’s hard to respond to Newt with those kind of ridiculous statements,” Biden began. “The fact is that for 23 months, people have been getting — the private sector’s been hiring people. The President talked about what we do think is fair. It’s fair to give the middle class a fighting shot here. To bring home jobs, incentiveize so that Americans can work here. We have a different priority set than Newt Gingrich, and apparently our Republican colleagues, have. We think it’s fair to focus on the people who built the country, who create the productivity. The people who need the jobs, who will go out and do a good job. There’s a reason why the in-sourcing is coming back. Our workers are the most productive workers in the world. We should do everything we can to deal with that.”

Biden’s response was of a piece with the Obama administration’s modus operandi on issues of economics and race, which has been to reinforce the idea that Barack Obama is everyone’s president, and to avoid calling out so-called racial dogwhistles. The President and his political team are (probably rightly) convinced that in any discussion of divisive racial politics, President Obama will be painted as the one doing the dividing.

The difference here is that Gingrich’s Food Stamps bit isn’t a dogwhistle, it’s a loud-and-proud bugle call. He defends the term using faulty statistics (more people were added to the Food Stamp rolls under President Bush than under President Obama, and the number is now declining), but Gingrich peeled back the mask on that defense when he singled out black people as being “satisfied with Food Stamps,” and of having no work ethic, other than for criminality. While the President may be wisely avoiding a political fight that could damage him, at a certain point, that consideration ought to be outweighed by the resentment that Gingrich is sowing toward the urban poor.