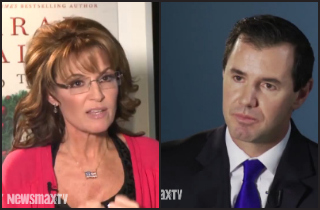 Palin told Concha she believes that Christie’s re-election victory shows a growing realization that the Democratic Party is run by “far leftists.”

“Hey, a Republican governor in a ‘blue state,'” she said of Christie’s win. “Right on! It beats the alternative. I’m happy for New Jersey.”

Palin did, however, echo tea party movement concerns that the New Jersey governor may be too “liberal” for the GOP’s 2016 nomination. “How would he do in a presidential race? How would he do nationwide?” she asked. “That remains to be seen because so many Americans, me included, me being a proud participant in that grassroots movement that is referred to as the tea party, we are tired of politicians […] vacillating on some very fundamental issues.”

Regardless, she said, she’s not as staunchly opposed to a Christie nomination as she has been in the past:

“It depends on who else is out there at the time. I’m not so anti-Chris Christie that, certainly, it’s not like I wouldn’t give him a chance … I would want to make sure that any candidate, not just Chris Christie, understands the import of empowering the people, individuals, our own businesses, our own families to make decisions for ourselves, not big government [making those decisions].”

Watch the full interview below via NewsMaxTV: