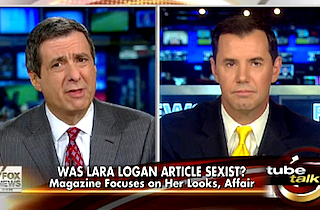 Following a New York investigative piece on CBS News correspondent Lara Logan’s iffy status at 60 Minutes, Mediaite columnist Joe Concha told Media Buzz’s Howard Kurtz that Logan was getting a raw deal from CBS, and the two men agreed that the NYMag piece was sexist in its focus on Logan’s looks and sex life.

Logan was suspended indefinitely following her Benghazi piece last fall that turned out to have been an opportunistic fiction; 60 Minutes had to retract the piece, and Logan apologized on-air. Logan was supposed to have returned early this year, but according to Joe Hagan mounting tensions within CBS News over Logan and head Jeff Fager have left her future there in doubt.

This isn’t fair, Concha argued. “This is a woman that has been in harm’s way more times than we can count,” Concha said, noting that this history included a horrible incident in Tahrir Square in which Logan was sexually assaulted. “Now the network can’t give her the common courtesy of a response of whether she’ll be back on the network or not, for one mistake. I think that earned her a mulligan.”

“She’s been left kind of twisting in the wind,” Kurtz said. “If it hadn’t been about Benghazi I think she would have been back by now, but it’s such a sensitive political issue.”

Concha and Kurtz agreed that the piece’s focus on Logan’s affairs and the implication that she benefited from her looks at CBS would never have been applied to a male subject. “There sure was a lot of personal stuff about her looks and her sex life that you don’t think would probably be in a profile of a globetrotting male war correspondent,” Kurtz said. (Ahem.)

Concha agreed: “This is a woman, again, that deserves better.”