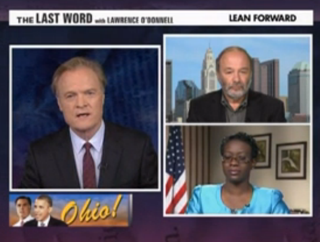 Time‘s Joe Klein added his voice to night to people who support the President but weren’t exactly sure about his speech on the economy today. Appearing with Lawrence O’Donnell on tonight’s Last Word, Klein said he thought the speech “works well with the base” but that the base wouldn’t be enough to win the election, and the President had generally “failed profoundly in his ability to explain what he’s done.”

O’Donnell had Klein on with State Sen. Nina Turner, who said the crowd was electric during the speech and that “people still have hope, hope springs eternal.” Klein, who had been in Ohio for a few days, said he found the election was going to be “close” because the President gave speeches like these, which “work well with the base, but this election is not going to be decided by them so much as it is by the 10-20% in the middle of the electorate and I don’t think that type of speech does much for them at all.” He explained that many of the people in the independent voting sector were “incredibly skeptical about the ability to do anything,” and “the President has failed profoundly in his ability to explain what he’s done.” For some examples, he noted, “nobody knows what is in Dodd-Frank; nobody knows what is in Obamacare,” and that made it much easier to attack him.

Sen. Turner disagreed, she thought “people understand the president saved the auto industry,” but Klein insisted that Romney benefited because “the economy has not improved as much as it should.”