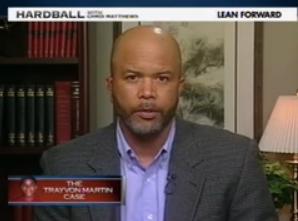 Former reporter and news anchor Joe Oliver continued his media tour on behalf of his friend George Zimmerman, who claims he killed 17 year-old Trayvon Martin in self defense, with an appearance on MSNBC’s Hardball. Among several inaccurate or contradictory claims, Oliver offered a bizarre explanation of the 911 tape in which Zimmerman appears to grumble “f**kin’ coons” moments before shooting Trayvon to death.

As Zimmerman’s friend, Joe Oliver’s take should be expected to be somewhat one-sided, but he made several statements that were misleading or outright false. He referred to a leaked police report of George Zimmerman’s account as “the report that was released today,” and that it “indicates that Trayvon came up to George and was the aggressor.”

Yes, that “report” “indicates” that because it was coming from George Zimmerman himself. Oliver used similarly parsed words in an earlier interview with Fox News, speaking of the moment the “gun went off,” and trying to raise the possibility that the shooting was accidental, in contradiction of Zimmerman’s claim of self defense.

But Oliver told an outright falsehood when he said that “there are witness accounts to verify that” Trayvon was the aggressor, and that “from the accounts that I’ve heard, it was Trayvon that threw the first punch that knocked George down and broke his nose.”

The only account that says Trayvon made the first physical contact is Zimmerman’s. All of the other witnesses’ accounts begin with the struggle already in progress, except one. The only surviving witness to Zimmerman’s first contact with Trayvon says it was Zimmerman who accosted Trayvon Martin. Whether you believe her or not, to claim that there are witnesses to that first contact who support Zimmerman’s story is a lie.

But the most bizarre thing about Oliver’s interview with host Chris Matthews was his explanation for that racially-charged 911 call.

Oliver said he’d listened to the tape over and over, and concluded that Zimmerman had either said “coon” or “goon,” and proceeded to offer strange mitigations for each. “There are a lot of parts of this country where people proudly call themselves coon-asses, Louisiana, in particular” and added that he didn’t know “too many people under 40 that use that term as a racial slur.”

I’m not even sure what he’s saying there…that Trayvon ventriloquated the word “coon” into Zimmerman’s phone as a boast about the Cajun heritage of his own ass? What the effing eff is he talking about?

Oliver also has Zimmerman covered on the “goon” front. “Goon, I’ve been informed by my 17-year-old daughter that, among her peers, that’s a term of endearment.”

So, now, 28 year-old George Zimmerman is a peer to 17 year-old girls? What the eff is this guy talking about?

The answer is simple. Instead of simply being an honest character witness for his friend, instead of just saying “The George Zimmerman I know could never have shot a young man in cold blood,” Joe Oliver has elected to deceive, mislead, and muddy the waters.  If the media are going to continue to enable this, they need to start calling him on it.