Joe Scarborough: Americans ‘Pragmatic’ In Being Both Increasingly Pro-Life And Pro-Gay Marriage
Video

Joe Scarborough: Americans ‘Pragmatic’ In Being Both Increasingly Pro-Life And Pro-Gay Marriage 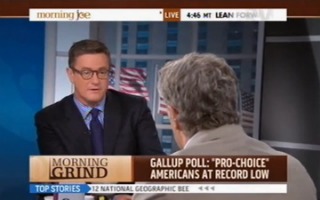 On Friday, the Morning Joe crew set their sights on a recent poll showing that 41 percent of Americans now identify themselves as “pro-choice” — a record low.

“It was 3d imagery,” said host Joe Scarborough, looking back before the birth of his son. “And you now have the technology not only that takes you — takes parents inside so early, and it’s three dimensional imaging. And you sit there, and you know what you do? you tear up. that’s what you do. ”

And not only that, but you compare viability in 1973 when Roe v. Wade was written with what it was when Jack went through what he went through four years ago, and what’s happening today. Suddenly, viability is pushed back further. And the imagery that allows parents to see their unborn children earlier, that’s having an impact. And I just — I remember seeing the 3D imagery. And as I walked out of the office, I said and we talked about it, this is going to change the abortion debate. Because you see that, and you immediately go, ‘Ok. You can call it what you want to call it. That’s a human being in there.”

“And that’s a life,” Scarborough echoed. “And I can ignore it. I can try to deny it. But that is a human in there. a human life. I mean, that’s not a political statement. That’s a statement as a dad.”

What’s more, Scarborough believes this shift points to the reality that, as he sees it, Americans are essentially pragmatic, both when it comes to the issues of abortion and changing attitudes regarding same-sex marriage. “They’re becoming more progressive on gay marriage,” he said, because they’re meeting more gay individuals, “And then, in other way, very practical, call it what you want to call it, this isn’t, this isn’t even a fetus, this is an unborn child, when they see that imagery.”

Panelist Jon Meacham then pointed out that Americans can be both pro-life and pro-choice, particularly in specific instances.