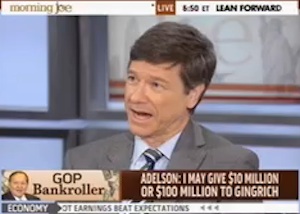 “He’s a completely, by the way, unlikable guy,” Sachs said of Adelson. “And do we really need major gambling influence and a guy that has played all over the world with governments, so that he gets the casino licenses and charges up and down as, really, a core leader of our politics? Come on!”

RELATED: Newt Gingrich: I Have A ‘Very Open Relationship’ With Billionaire Who Funds Super PAC

“Let me ask you again — and I’m not attacking George Soros, but I don’t think you like…” Scarborough began.

“It’s not about Soros — it’s about this wrecked system.” interjected Sachs. “So why don’t we say it? And why don’t we –”

“But if you’re going to attack this man for doing this –” Scarborough started to say before getting cut off.

“I’m not attacking this man. I’m saying how pathetic it is that as grown-ups we sit around the table saying this is what democracy is right now.” Sachs fumed.

“Well, we’re not grown-ups saying, ‘This is what democracy’ — these are the rules of the game,” Scarborough acknowledged.

“These rules are miserable,” Sachs countered. “Made by five Supreme Court justices.”

“Answer my question. Who do you prefer?” Scarborough continued. “Whose approach do you prefer? George Soros who is doing things legally and as a citizen of the country he can do it and I have no problem with him doing it, setting up all of these organizations to shield his money and to funnel his money so it’s harder to trace it back to who he’s contributing to? Or a guy who writes a check and this is who I am, this is what I’m doing.”

“I want the American people, and all of us as grown-ups to say, first of all, ‘This is completely rotten…” Sachs said.

“If you can answer my question,” Scarborough pressed.

“Joe! listen to me once! Joe, please!” Sachs boomed.

“Joe, I’m sorry, but you do this each time!” Sachs shouted back.

Watch the two duke it out below via MSNBC: