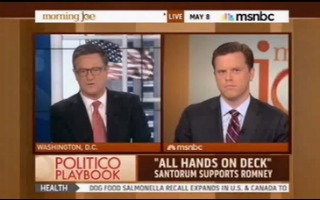 On Monday night around 11 p.m., former GOP presidential hopeful Rick Santorum offered his endorsement of the party’s presumptive nominee Mitt Romney in the form of an email, voicing his official support deep in the message’s thirteenth paragraph. Morning Joe host Joe Scarborough, for one, wasn’t having it.

“I can tell you, this e-mail, this meeting did nothing to endear him to the Romney folks,” shared Politico’s Mike Allen. “And we’re about to have a big test of the backbone of the Romney campaign. Will they deny Rick Santorum a speaking slot? People at the top of the campaign have concluded that the chances Rick Santorum will give a helpful speech, an on-message speech are zero. So there’s a push to say we are not going to have him speak. We are not going to have a distraction.”

“If somebody gave me this type of endorsement and if it were my convention coming up,” added Scarborough, “I would tell them they would have a speaking role, but it would be in that cage where the protesters are going to be, eleven blocks away. I wouldn’t let a guy like this anywhere near the stage, and I would let him know that right now. Say ‘you’ve just screwed yourself, buddy. You have a couple months if you want to play ball. But if you don’t, that’s fine. If you want to be a rabble-rouser, go ahead. It’s my party now.'”

“Bottom line, Willie,” he later continued, “this is bush league. If you don’t want to endorse him, don’t endorse him. That’s fine. People will respect you for not endorsing him. But again, this is like Obama on gay marriage. Don’t have it both ways, don’t endorse in the 13th paragraph. Be a man and say I can’t endorse him or come out and endorse him.”