Scarborough: Before Fox “Glenn Beck Was A Nobody And I Will Say It Loud And Clear” 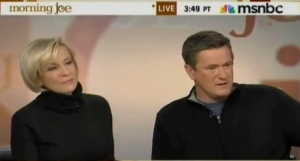 In the continuing war of words between Joe Scarborough and Glenn Beck, Scarborough really didn’t hold back today on Morning Joe. Scarborough expressed concern because apparently he has many friends and family members who watch Beck and get frightened when they allegedly hear Beck say that President Obama is a racist and a marxist who is killing freedom in America.

Scarborough seemed most worried about his mother, apparently a loyal Beck viewer:

“My mom and a lot of other people like her that watch him every day start to believe if they hear every day, every day, that there’s this guy in Washington D.C. – this black guy that hates all white people and he wants to take your money . . . and he wants to destroy the country you grew up in. You feed that vile message to Americans every day, it’s going to have an impact. I’m not saying people are going to get shot, but it is going to have a corrosive impact on our culture and on our politics.”

Scarborough asked conservatives to call out there most extreme elements, and presumably to do something to stop Beck. When panelist Mark Halperin asked Scarborough if he thought the recent statements of Roger Ailes to “tone it down” would be complied with by Beck, Scarborough predicted that if Beck doesn’t listen to Ailes then he will be promptly off the air:

“Glenn Beck was a nobody and I will say it loud and clear on TV. He was a nobody at Headline News – a nobody – and then Roger Ailes took him under his wings and suddenly he became a superstar. And you know what, if Roger Ailes decides to kick him out of Fox News, well he’ll go back to the Glenn Beck he was before.”

Whether Beck would return to being a “nobody” if Scarborough’s prediction were ever to become reality, is likely something many, including Scarborough’s own mother, would probably dispute.