Joe Scarborough Blasts Conservative ‘Bullies’ For ‘Destroying’ GOP: ‘Punch Them In The Face’ 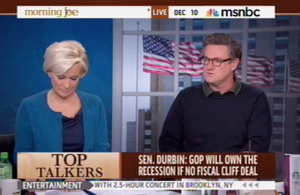 On Monday, Joe Scarborough took a harsh look at the conservative “racket” The Weekly Standard‘s Bill Kristol described recently in an op-ed. Agreeing with the sentiment, Scarborough criticized those in the conservative movement who are simply getting rich while “destroying” the Republican Party.

“You have a lot of people running around, saying harsh things that sell books and push ratings and lose elections,” Scarborough said. “And that’s where we are. Conservatism is a racket for a lot of people to get very, very rich. With no thought of winning elections.”

Conservatives have winning ideas, he added, but they’re not being put forth in an effective way. “Our philosophy is a governing philosophy for the future,” he said, “but that’s been stripped away by the anti-intellectualism of the past decade and the conservative cause.”

Scarborough noted that there are exceptions, but that those who do try to push the message of compassionate conservatism in an “intelligent way” are “thrown to the side because they don’t sound enough like Glenn Beck or a blogger.” They’re “cowards” and “bullies,” he said. “You punch them in the face, and they back off.”

He boiled down his criticism thusly: They’re getting rich, but “destroying the Republican Party every day.” That said, they’re not quite hurting the country, because “they’re irrelevant.”

Willie Geist questioned dismissing talk radio hosts like Rush Limbaugh, who has a large following. “That’s not nothing.”