Joe Scarborough Calls Out Beck, Bachmann (Not By Name) In McVeigh Discussion
video

Joe Scarborough Calls Out Beck, Bachmann (Not By Name) In McVeigh Discussion 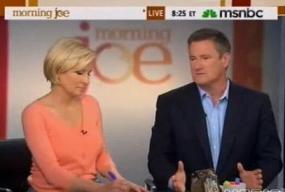 This morning on MSNBC’s Morning Joe, Joe Scarborough used tonight’s Timothy McVeigh special as a jumping off point to talk more broadly about the rage on both sides of the political spectrum.

And as he often does, he called out a couple personalities – although not by name.

But it was the rage on the right he focused on specifically this morning – as the special tonight is likely to do as well (at least according to the tone of the countless promos MSNBC has run). “People that say that we shouldn’t be concerned when the President of the United States is called a racist who hates all white people I say you don’t know history,” said Scarborough, referring to Glenn Beck. “People say things in the heat of the moment for higher ratings for bigger book sales for a bigger splash.”

Then there was this, in reference to Rep. Michele Bachmann:

When a Republican congresswoman goes out and accuses this President of being a gangster president or a gangster government, again I’m not comparing that to anything that led to Oklahoma City. I’m saying our democracy will die a death by a thousand little cuts.

This is par for the course with Scarborough, who uses his three-hour morning show to occasional comment specifically and honestly about other news personalities – sometimes even those at his network. But just like the past, there was the coy way of being honest – not calling out people by name, but hinting at who he’s referring to. Anonymous honesty (or anonymesty)? Although, he has called out Beck by name as well.

Here’s the clip from this morning: