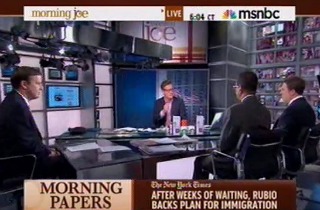 On Monday, MSNBC’s host of Morning Joe, Joe Scarborough, dug into the details of the horrific trial of Philadelphia-based late-term abortion provider Kermit Gosnell. Scarborough’s multifaceted coverage of the case, featuring both journalistic and editorial segments, was incisive, compelling, and responsible. However, his show’s focus on the Gosnell story draws attention to his network’s striking silence about the case. Amid copious, even gratuitous, coverage of the GOP and abortion rights on Friday and over the weekend, MSNBC’s hosts went out of their way to avoid mentioning the Gosnell murders.

The Gosnell story had been simmering in issue-oriented blogs and in the Philadelphia press for months, but it burst into the mainstream after Daily Beast columnist Kirsten Powers published a column in USA Today last Thursday admonishing the national political press for ignoring the story.

The following day, the story exploded in the mainstream press and on the cable news outlets, but MSNBC struggled to maintain its gag on the coverage of the case. The network’s silence about the Gosnell trial, a major focus of its cable news competitors on Friday, was made all the more conspicuous because of the network’s decision to run a slew of stories regarding abortion rights.

The release of an NBC News/Wall Street Journal poll which showed a steep decline in the public’s support for unregulated abortion in combination with a speech delivered by Rep. Paul Ryan (R-WI) on Thursday night calling for conservatives to be more inclusive when they advocate for pro-life polices prompted 10 segments on abortion on MSNBC on Friday. With the exception of Morning Joe, The Cycle, All In, and The Last Word, every program on the network touched on the issue of abortion and how it relates to the Republican Party’s political appeal in some form.

The abortion issue spilled over into Saturday, when the network aired two straight news segments on the same topic – all while carefully avoiding the Gosnell case.

Today, Scarborough and his panel guests dove right into the controversial Gosnell case – and they did so without displaying an ounce of timidity.

At the bottom of the 6 a.m. EST hour of Morning Joe, Scarborough interviewed Philadelphia Inquirer reporter Joseph Slobodzian about the gruesome details of the case – details which he covered extensively as his paper’s courtroom reporter for the Gosnell trial.

Scarborough and his panel then, at the top of the 7 a.m. hour, dug into the political and journalistic implications of the media’s lack of coverage of the Gosnell case before the nation’s commentary class engaged in a campaign of shaming the media into pursuing the story.

“It’s so repugnant that you turn your eyes away,” Scarborough said to former New York Times columnist Bob Herbert. “As a reporter though, that’s when you know you have to pursue it.”

“When there are things in there that repel you so much you don’t want to think about it, you know the story is important,” Herbert replied.

Scarborough turned to BuzzFeed editor Ben Smith and remarked that his publication had been following the case “for a little while.” Smith noted that the story had become “politicized” because the majority of the individuals or organizations highlighting the lack of media coverage of the sensational story were either conservative or pro-life groups.

Smith also noted that the fact that women felt they had no choice but to patronize Gosnell’s services “says something about health care.” He conceded, however, upon prodding by Scarborough, that the unconscionable practices Gosnell engaged in signified that the story transcends a debate about late-term abortion practices.

What’s more, Scarborough cited the NBC/WSJ polling data which spawned a plethora of abortion segments on Friday and Saturday on his network, but he did so within the context of the Gosnell case. Scarborough showed, if anyone was confused about the matter, that such a feat could have been accomplished last week.

Later in the hour, Scarborough invited Rep. Masha Blackburn (R-TN) who took on the political angle of the Gosnell story. She said that, in much the same way that the Newtown massacre served as a wakeup call for gun control advocates and was the impetus behind the latest legislative push for new gun laws, the Gosnell case will serve as a beacon for pro-life activists who she said will call for stronger protections for infants and the unborn.

As is so often the case, Scarborough leads the way on his network and shows how the Gosnell case can be covered from all angles – even those angles not favorable to conservatives or abortion rights activists. Scarborough’s guests highlighted multiple areas of the debate, from a well-deserved scolding of the press for ignoring the story to a reasonable justification of the media’s silence. But if Scarborough could do it, why couldn’t – or why wouldn’t — his colleagues?