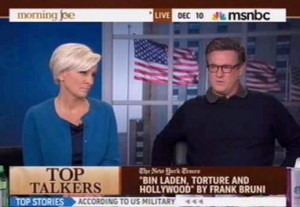 On Monday morning’s Morning Joe, host Joe Scarborough led a panel discussion of Frank Bruni‘s New York Times op-ed piece, “Bin Laden, Torture and Hollywood,” which is about the depiction of torture in the forthcoming hunt-for-bin Laden film Zero Dark Thirty. In textbook Morning Joe fashion, the assembled panel debated some of the finer points of Bruni’s piece, but none of them challenged Scarborough’s assertion that the film proves that torture works, and was crucial to the killing of Osama bin Laden, an assertion that the film’s screenwriter admits, and that the facts demonstrate, is false.

Co-host Mika Brzezinski began with a selective reading of Bruni’s piece, in which he describes the depiction of torture:

It’s about finding a needle in a uniquely messy and menacing haystack. “Enhanced interrogation techniques” like waterboarding are presented as crucial to that search, and it’s hard not to focus on them, because the first extended sequence in the movie shows a detainee being strung up by his wrists, sexually humiliated, deprived of sleep, made to feel as if he’s drowning and shoved into a box smaller than a coffin.

Scarborough then told the panel that Hurt Locker director Kathryn Bigelow‘s Zero Dark Thirty “presents a narrative that is going to make a lot of people in the mainstream media, in the Democratic party and in the administration uncomfortable, and that is the truth that Barack Obama learned, the first briefing that he got after after he won the election, and that is that the CIA program, whether you find it repugnant or not, actually was effective with KSM and other people getting actionable intelligence that led to couriers, that led, eventually, years later, to the killing of Osama bin Laden.”

Guest panelist David Ignatius added that “There’s no question in the record that the film shows, and in other research that I’ve done, that the name of the courier who led us to bin Laden’s hideout in Abbottabad emerged in these harsh interrogations,” which, as you’ll see, is not the same thing as saying we learned his name through torture. We did not.

Scarborough went on to complain about the years he’s had to endure people telling him that torture doesn’t work (yeah, that must have been torture), but “I knew that was just not true. It did get information, Khalid Sheikh Mohammed and other terrorists, that eventually led to not just the killing of Osama bin Laden, but a lot of victories.”

He also joked about prisoners being tortured by having to watch three hours of Morning Joe a day, because torture is now hilarious, because Joe Scarborough says this movie proves it works.

Except it doesn’t, as Zero Dark Thirty screenwriter Mark Boal blithely admits. From The New Yorker:

The film includes wrenching scenes of a terrorist suspect being waterboarded and subjected to other forms of torture by C.I.A. operatives; the suspect eventually surrenders information that helps lead to bin Laden. Bigelow maintains that everything in the film is based on first-hand accounts, but the waterboarding scene, which is likely to stir up controversy, appears to have strayed from real life. According to several official sources, including Dianne Feinstein [read more here], the head of the Senate Intelligence Committee, the identity of bin Laden’s courier, whose trail led the C.I.A. to the hideout in Pakistan, was not discovered through waterboarding. “It’s a movie, not a documentary,” Boal said. “We’re trying to make the point that waterboarding and other harsh tactics were part of the C.I.A. program.” Still, Bigelow said, “the film doesn’t have an agenda, and it doesn’t judge. I wanted a boots-on-the-ground experience.”

It’s one thing to just be wrong, but this Morning Joe segment tips over into dishonesty. First of all, the very piece that Mika Brzezinski pegs the entire segment to contains two paragraphs about factual disputes of the film’s depiction of torture, which are never referenced. Worse than that, though, Ignatius brags about having had breakfast with the It’s a movie, not a documentary” guy on Saturday morning, and presents the film’s version of events as gospel.

As a matter of (actual) fact, then-CIA Director Leon Panetta told Sen. John McCain (who has been one of those torture opponents who have so plagued Joe Scarborough), in a private letter, that the courier’s operational name first emerged from “a detainee not in CIA custody in 2002,” and that “no detainee in CIA custody revealed the facilitator/courier’s full true name or specific whereabouts.”

Further reporting by The New York Times shows that even when KSM “corroborated” courier Abu Ahmed al-Kuwaiti’s identity, he did so months after the waterboarding had stopped, and did so by providing interrogators with false information. They got much more useful information from a different prisoner who wasn’t waterboarded. Perhaps noted hippie peacenik Sen. John McCain can explain why that is:

In fact, the use of “enhanced interrogation techniques” on Khalid Sheik Mohammed produced false and misleading information. He specifically told his interrogators that Abu Ahmed had moved to Peshawar, got married and ceased his role as an al-Qaeda facilitator — none of which was true. According to the staff of the Senate intelligence committee, the best intelligence gained from a CIA detainee — information describing Abu Ahmed al-Kuwaiti’s real role in al-Qaeda and his true relationship to bin Laden — was obtained through standard, noncoercive means.

I know from personal experience that the abuse of prisoners sometimes produces good intelligence but often produces bad intelligence because under torture a person will say anything he thinks his captors want to hear — true or false — if he believes it will relieve his suffering. Often, information provided to stop the torture is deliberately misleading.

Now, John McCain is no Joe Scarborough, but he ought to have almost as much credibility on this issue. It’s rumored that he once watched Morning Joe for three consecutive hours. Or something like that.