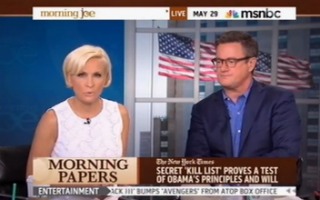 On Tuesday, the folks at Morning Joe took some time to discuss recent news regarding President Barack Obama‘s role in the creation and implementation of a so-called “Kill List.”

“The President,” explained Mika Brzezinski, “of course, the President who argued against the use of torture and wanted to close Gitmo, has been personally overseeing a top-secret process of which Al Qaeda suspects should be placed on a ‘kill list’ as part of a drone war against Al Qaeda.” According to his aides, she added, the President believes he should take “moral responsibility” for attacks in places like, for example, Yemen.

Newsweek‘s Tina Brown was on hand to discuss her magazine’s piece on “Drones: How Obama Learned to Kill,” written by Daniel Klaidman, explaining the educational process, as it were, of Obama when it comes to the particulars and realities of war.

Brzezinski read an excerpt from the piece:

The president had come a long way in a short time. Schooled as a constitutional lawyer, he had had to adjust quickly to the hardest part of the job: deciding whom to kill, when to kill them, and when it makes sense to put Americans in harm’s way. His instincts tilted toward justice and protecting the innocent, but he also knew that war is a messy business no matter how carefully it is conducted. He saw the drones as a particularly useful tool in a global conflict, but he was also mindful of the possibility of blowback.

In this overheated election season, Obama’s campaign is painting a portrait of a steely commander who pursues the enemy without flinching. But the truth is more complex, and in many ways, more reassuring. The president is not a robotic killing machine. The choices he faces are brutally difficult, and he has struggled with them—sometimes turning them over in his mind again and again. The people around him have also battled and disagreed. They’ve invoked the safety of America on the one hand and the righteousness of what America stands for on the other.

“I don’t know,” he said, “maybe I shouldn’t be concerned. I know the President wants to know every person that’s killing and he wants the baseball cards, as they call them. I’m just concerned for some reason, it doesn’t seem right taking that into the Oval Office and having the president of the United States specifically responsible. He says he wants to do it for moral reasons, but specifically responsible for pointing to a picture, they say, of one 17-year-old girl saying ‘yes, kill her and let’s kill him’ and… It sort of made me flinch. It reminds me of LBJ picking up bombing targets during the Vietnam War.”

Later in the segment, Scarborough asked panelist Steve Rattner to share his thoughts on the matter. “I think I actually feel okay with it,” he replied. “I think I’m with John [Heilemann] on this. I think he’s basically accepting the responsibility of being Commander-in-Chief, of making those decisions of having people killed, not trying to make it a vague thing off in the distance that he’s not really connected to. And I think, certainly, the White House is probably very pleased to project in image of him as someone engaged who’s got a muscular foreign policy within the parameters they are able to operate in today.”

“Drone attacks are not precise,” countered Scarborough. “Beating down doors and shooting people in the head — that is precise. There is nothing precise about drone attacks.” He then wondered whether the American people don’t want their president — any president, not solely Obama — to have some sort of “plausible deniability” when it comes to casualties in war.

Then, turning to Brzezinski, he shared more of his trepidation over the President’s handling of war:

I just wonder how this is going to look ten years from now. There are a lot of decisions George W. Bush and Democrats in the intel committee made ten years ago that people like Nancy Pelosi grew to regret later because — and Dianne Feinstein, a lot of progressives went along with things, decisions that were made — including water boarding in 2002 — that they tried to backtrack on four or five years later. I just wonder, ten years from now, what we’re going to be saying about a president lining up pictures of teenagers in the Oval Office. I’m not talking the morality of doing it or not doing it, I’m just talking about whether it should be kept away from the president, away from the White House. And you stack that on top of us launching drone attacks in countries where we haven’t even declared war.