Joe Scarborough Explodes At Rep. Huelskamp’s Assertion That Newtown Tragedy Is Being ‘Politicized’ 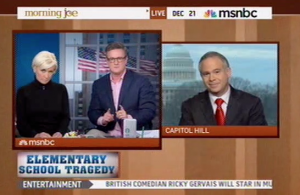 Things got heated this morning on Morning Joe, when Republican congressman from Kansas, Tim Huelskamp, was asked about his thoughts on gun control following their discussion about the fiscal cliff deal. While Huelskamp’s opposition to an assault weapons ban was a point of contention, it was his assertion that the tragedy in Newtown, Conn. not be used to further a “political agenda” that sent Joe Scarborough over the edge.

“What has bothered me the most as a representative is how this has been politicized so quickly that somehow if we had changed one single law — which as I understand it, the state of Connecticut had laws against these kind of things — and somehow that would have changed things,” Huelskamp said.

Pointing to his own children, Huelskamp noted that video games are an issue, so parents need to be cognizant of what their children are up to. Mental health is also an issue, he said, but “it’s not a gun problem.”

Huelskamp countered that there’ve been many “misleading” statements, including on that show. Scarborough took on his assertion by citing gun laws and gun violence in other countries and states. Asked whether it’s a constitutional issue, Huelskamp replied that it’s a Second Amendment issue.

He added, “But gosh, let’s step back. Let’s not build on the tragedy in Connecticut and use that to actually push a political agenda.” Which is what President Obama is doing, he said.

And with that, they were off.

“Do you dare come on my show and say I am using the slaughter of 20 little six- and seven-year-old children, I’m using that for political purposes, Tim?”

“Joe, how many children do you have?” Huelskamp asked.

“So do I,” Huelskamp said. “And I refuse to let you say that because you have children, or anybody else, that we need to actually politicize this.”

Pointing to the numerous instances of gun violence in recent years, Scarborough said, “So we can’t at least talk about guns without you questioning my integrity and saying that I’m using the death of 20 children to try to make life for my children a little bit safer? We can’t even talk about it without you coming on this show and insulting me personally?”

Unsurprisingly, they ended on a bad note.